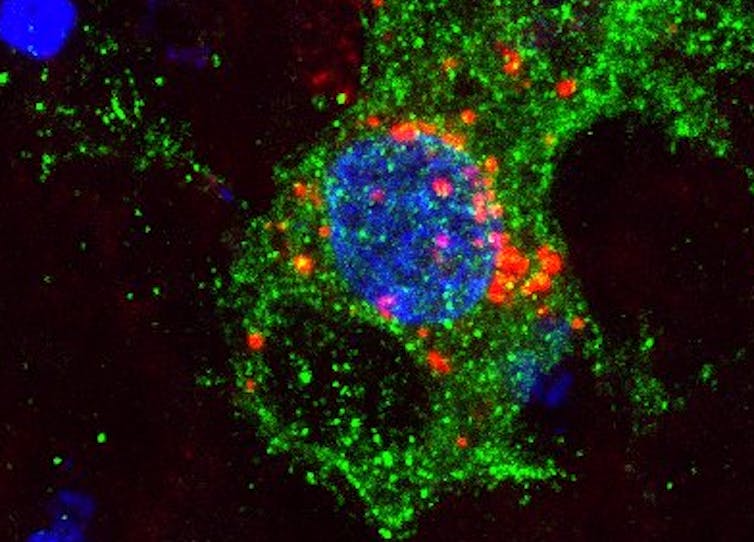 While many people love colorful photos of landscapes, flowers or rainbows, some biomedical researchers treasure vivid images on a much smaller scale – as tiny as one-thousandth the width of a human hair.

To study the micro world and help advance medical knowledge and treatments, these scientists use fluorescent nano-sized particles.

Quantum dots are one type of nanoparticle, more commonly known for their use in TV screens. They’re super tiny crystals that can transport electrons. When UV light hits these semiconducting particles, they can emit light of various colors.

That fluorescence allows scientists to use them to study hidden or otherwise cryptic parts of cells, organs and other structures.

I’m part of a group of nanotechnology and neuroscience researchers at the University of Washington investigating how quantum dots behave in the brain.

Common brain diseases are estimated to cost the U.S. nearly US$800 billion annually. These diseases – including Alzheimer’s disease and neurodevelopmental disorders – are hard to diagnose or treat.

Nanoscale tools, such as quantum dots, that can capture the nuance in complicated cell activities hold promise as brain-imaging tools or drug delivery carriers for the brain. But because there are many reasons to be concerned about their use in medicine, mainly related to health and safety, it’s important to figure out more about how they work in biological systems.

Researchers first discovered quantum dots in the 1980s. These tiny particles are different from other crystals in that they can produce different colors depending on their size. They are so small that that they are sometimes called zero-dimensional or artificial atoms.

The most commonly known use of quantum dots nowadays may be TV screens. Samsung launched their QLED TVs in 2015, and a few other companies followed not long after. But scientists have been eyeing quantum dots for almost a decade. Because of their unique optical properties – they can produce thousands of bright, sharp fluorescent colors – scientists started using them as optical sensors or imaging probes, particularly in medical research.

Scientists have long used various dyes to tag cells, organs and other tissues to view the inner workings of the body, whether that be for diagnosis or for fundamental research.

The most common dyes have some significant problems. For one, their color often cannot survive very long in cells or tissues. They may fade in a matter of seconds or minutes. For some types of research, such as tracking cell behaviors or delivering drugs in the body, these organic dyes simply do not last long enough.

Quantum dots would solve those problems. They are very bright and fade very slowly. Their color can still stand out after a month. Moreover, they are too small to physically affect the movement of cells or molecules.

Those properties make quantum dots popular in medical research. Nowadays quantum dots are mainly used for high resolution 3D imaging of cells or molecules, or real-time tracking probes inside or outside of animal bodies that can last for an extended period.

But their use is still restricted to animal research, because scientists are concerned about their use in human beings. Quantum dots commonly contain cadmium, a heavy metal that is highly poisonous and carcinogenic. They may leak the toxic metal or form an unstable aggregate, causing cell death and inflammation. Some organs may tolerate a small amount of this, but the brain cannot withstand such injury.

How quantum dots behave in the brain

My colleagues and I believe an important first step toward wider use of quantum dots in medicine is understanding how they behave in biological environments. That could help scientists design quantum dots suitable for medical research and diagnostics: When they’re injected into the body, they need to stay small particles, be not very toxic and able to target specific types of cells.

We looked at the stability, toxicity and cellular interactions of quantum dots in the developing brains of rats. We wrapped the tiny quantum dots in different chemical “coats.” Scientists believe these coats, with their various chemical properties, control the way quantum dots interact with the biological environment that surrounds them. Then we evaluated how quantum dots performed in three commonly used brain-related models: cell cultures, rat brain slices and individual live rats.

We found that different chemical coats give quantum dots different behaviors. Quantum dots with a polymer coat of polyethylene glycol (PEG) were the most promising. They are more stable and less toxic in the rat brain, and at a certain dose don’t kill cells. It turns out that PEG-coated quantum dots activate a biological pathway that ramps up the production of a molecule that detoxifies metal. It’s a protective mechanism embedded in the cells that happens to ward off injury by quantum dots.

Quantum dots are also “eaten” by microglia, the brain’s inner immune cells. These cells regulate inflammation in the brain and are involved in multiple brain disorders. Quantum dots are then transported to the microglia’s lysosomes, the cell’s garbage cans, for degradation.

Quantum dots encounter different conditions in a cell, a slice of brain, or a live animal. Original images by DBCLS 統合TV [CC BY 4.0 (https://creativecommons.org/licenses/by/4.0)] & mcmurryjulie from Pixabay

But we also discovered that the behaviors of quantum dots vary slightly between cell cultures, brain slices and living animals. The simplified models may demonstrate how a part of the brain responds, but they are not a substitute for the entire organ.

For example, cell cultures contain brain cells but lack the connected cellular networks that tissues have. Brain slices have more structure than cell cultures, but they also lack the full organ’s blood-brain barrier – its “Great Wall” that prevents foreign objects from entering.

What’s the future for quantum dots?

Our results offer a warning: Nanomedicine research in the brain makes no sense without carefully considering the organ’s complexity.

That said, we think our findings can help researchers design quantum dots that are more suitable for use in living brains. For example, our research shows that PEG-coated quantum dots remain stable and relatively nontoxic in living brain tissue while having great imaging performance. We imagine they could be used to track real-time movements of viruses or cells in the brain.

In the future, along with MRI or CT scans, quantum dots may become vital imaging tools. They might also be used as traceable carriers that deliver drugs to specific cells. Ultimately, though, for quantum dots to realize their biomedical potential beyond research, scientists must address health and safety concerns.

Although there’s a long way to go, my colleagues and I hope the future for quantum dots may be as bright and colorful as the artificial atoms themselves.